Victims are to be Believed and their Cases Referred to Trial: Air Force Judge Advocate General; Lieutenant General Richard Harding

Previous Next
Victims are to be Believed and their Cases Referred to Trial: Air Force Judge Advocate General; Lieutenant General Richard Harding

Victims are to be Believed and their Cases Referred to Trial: Air Force Judge Advocate General; Lieutenant General Richard Harding

by   Michael Conzachi, Director of Military Justice Accountability, Save Our Heroes

Recently, an Air Force appellate court decision came down in the case of the U.S. vs. Airman First Class Brandon T. Wright (1). A1C Wright was charged with several counts of sexual assault in 2013, involving his female supervisor a noncommissioned officer from his duty section, following a shopping trip and an evening of watching movies and drinking, in July of 2012 in Italy. The GCMCA for these charges was then, Lieutenant General Craig Franklin, the Commander of Third Air Force.

Then Lieutenant General Franklin; who has since retired as a ‘two-star’ drew previous intense criticism and the wrath of Senator’s Gillibrand and McCaskill; among others, because he dared to dismiss the sexual assault conviction of former Lieutenant Colonel James Wilkerson, in which Franklin; after intense review of all transcripts and consultation with his legal staff (2). The reason for his dismissal was that he determined that the case lacked sufficient probable cause and evidence, and believed that the alleged victim lacked credibility (3).

In the Wright case, LTG Franklin, after the Article 32 (preliminary) Hearing which included testimony from the alleged victim, the Article 32 Hearing Officer recommended that charges NOT be referred to court-martial. The primary reason was the victim’s lack of credibility and that a friend of the accused provided information that in his opinion, the sexual encounter was completely consensual. This friend alluded to, that he could hear the accuser in another room moan in sexual pleasure. Two additional staff judge advocates as well as three additional staff judge advocates for the special court-martial convening authority agreed with that decision.

After SIX (6) Air Force Attorneys (judge advocates) all agreed that the alleged victim lacked credibility and an investigating officer recommended that the case NOT go forward, it was submitted to LTG Franklin. He then agreed with that decision and dismissed the charges.

Here is the incredulous part and a full admission by THE Judge Advocate of the Air Force; Lieutenant General Richard Harding, made the following statement;

According to Col Bialke, Lt Gen Harding stated the following:

“the failure to refer the case to trial would place the Air Force in a difficult position with Congress; absent a “smoking gun,” victims are to be believed and their cases referred to trial; and dismissing the charges without meeting with the named victim violated an Air Force regulation.”

Here is a photo of LTG Harding. 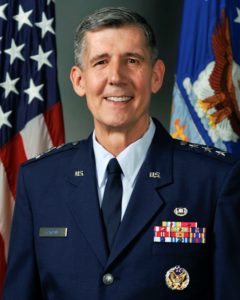 For the unlawful command influence aspect of the motion, the defense argued that a;

“toxic” atmosphere existed with regard to sexual assaults in the military which, when coupled with pressure to increase prosecutions and convictions, created an environment in which no military accused facing sexual assault charges would be treated fairly. “

“the level of toxicity and pressure had reached an unprecedented level in the appellee’s case.”

There were other arguments that are contained in the link, but we can see the ferocity in which the military; in this case, the Air Force was hell bent to prosecute and convict A1C Wright by any means necessary, and shows first-hand the complete cowardice of the Air Force Judge Advocate; Lieutenant General Richard Harding.

Imagine the groveling and trembling fear of the man who is supposed to be; in essence, the attorney general of the Air Force; who was in such a state of fear of Congress, that he exerted his command influence in order to insure that A1C Wright was convicted despite the evidence and the alleged victim’s complete lack of credibility; a lack of credibility that was recognized and affirmed by SIX Air Force prosecutors!!!

A1C Wright was eventually acquitted of all charges (4) however there is no information available if he was retained in the Air Force.

It has been learned that LTG Harding retired on April 1st, 2014 and now assists universities and interest groups in eradicating campus sexual assaults, with ‘successful lessons learned from combating military sexual assaults.’ He serves on the Advisory Council of the National Crime Victims’ Legal Institute.

‘Successful?’ Really; ‘Successful?’ The only ‘successful thing about this case, was that after beginning a saga in the summer of 2012; a saga in which the top lawyer in the Air Force quipped in perhaps a trembling tone, that victims are to be believed, and boo-hoo, we are getting pressure from congress; A1C Wright was eventually acquitted of charges that should have never been brought in the first place.

What kind of success did A1C Wright enjoy during his three plus years, while his case meandered through the military legal system, chain of command and the appellate courts? What kind of success did his psyche enjoy? How many thousands or tens of thousands of dollars did he have to expend to clear his name? What ‘success’ has he enjoyed in his life?

This case is just one of countless others that does reinforce that there IS an epidemic related to sexual assault in the military. The epidemic however IS NOT sexual assault but is;

The case of Airman First Class Brandon Wright, is just another; I mean another,,, another,,, yes,,, another in a seemingly endless list of cases, in which the only actual crimes committed were by those who were in the decision making process to convict and send to prison, a man who is innocent (5).

When will it stop; when will those responsible for these miscarriages of justice be held responsible; when will the Senate and House Armed Services Committees enact some legislation to put a stop to this lunacy? It’s unknown, but we must remember that there are many more A1C Brandon Wrights out there and many sitting in cells.

So what’s your thoughts? What do YOU think the real epidemic lies?

While I will admit that sexual assaults in the military do happen, and when they do, those responsible should and must be punished and those actual victims should be afforded the services and financial assistance they deserve.

What we are seeing now however, is an avalanche; an avalanche of false allegations, witch hunts, prosecutorial misconduct and unlawful command influence; all in the name of appeasing the rape culture hysteric cottage industry and their enablers in the legislature.

Our military men face intense danger in the battlefield, but also face intense danger of experiencing the wrath of the military’s sexual assault witch hunt, and those actual victims are harmed by the wonton lies of false accusers and torch and pitch fork carrying commanders and prosecutors.

By Save Our Heros|April 22nd, 2017|Military Justice, Military News|Comments Off on Victims are to be Believed and their Cases Referred to Trial: Air Force Judge Advocate General; Lieutenant General Richard Harding