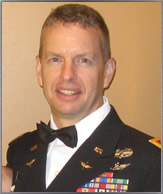 Major “Kit” Martin was raised in a military family on the front lines of the Cold War; his father, a Vietnam Vet, served more than three-decades in the USAF and his sister was a career USAF nurse.

Kit was an Eagle Scout and served in the Army for 30 years, since he was 17. He was a Calvary Scout, Ranger, Signal Officer, and later a Master Aviator and Apache Helicopter Pilot. After 9/11, he left a very successful civilian career and returned to active duty in order to defend his country. Within eight years, he completed several combat deployments on the ground and in the air, placing himself in harm’s way almost every day. He earned three Bronze Stars, an Air Medal, and the Combat Action Badge. He was also selected to attend the United States Naval War College where he graduated with honors and earned a Master’s Degree. He has a stellar military record, superior evaluations, and never has received so much as a speeding ticket. He is a stellar soldier and a stellar human being.

Kit thought he had it all; a fairy tale marriage to a beautiful wife, three step-kids he raised as his own, and a distinguished military career ahead of him. Unknown to him, his marriage was a fairy tale, actually it was a fraud; it wasn’t real, and when he tried to divorce his cheating “bigamist” wife; a woman with a secret past, she promised to ruin his life. In response, he did everything “right” and made all notifications to local authorities and Army officials. In a court hearing his “wife” was exposed as a professional con-artist and liar that had forced her children to lie (court video). Kit thought his nightmare had ended; but he was wrong. In fact, his nightmare only continued and got worse as she then accused him of being an international spy!

Kit was then secretly investigated, then interrogated, and polygraphed and finally cleared by Army Counter Intelligence. Afterwards Kit submitted an inquiry to U.S. Senator Rand Paul. BG Stammer then tried to give Kit an Article 15 in retaliation even though he had been cleared. Army JAG and CID then re-contacted his bigamist felon ex-“wife” and instigated allegations to include rape, sexual assault, and child sex abuse. The allegations continued to escalate, finally resulting in a court-martial in which numerous other “collateral” charges were stacked on top of false sexual misconduct allegations. Initially, he faced nearly 58 years in confinement.

The obvious retaliatory action by now Major General Mark Stammer was noticed by the Department of Defense, Office of Inspector General who initiated an official “whistleblower” investigation that is ongoing (DoD Office of Inspector General. Case #20150408-030726). Rather than utilize common sense and logic, MG Stammer intensified his campaign. Fort Campbell prosecutors badgered and harassed civilian prosecutors to drop felony bigamy charges against his ex-wife. Then prosecutors and investigators harassed and attempted to “strong-arm” his family and defense witnesses. A civilian prosecutor rejected the badgering, then prosecuted and convicted his ex-wife, and testified as a defense witness in a hearing concerning Unlawful Command Influence and JAG prosecutorial misconduct. Two JAG prosecutors committed perjury during the hearing, but a military judge later covered for them. Still yet, it was later discovered that Fort Campbell prosecutors offered Kit’s false accuser nearly a quarter of a million dollars if he was convicted of some type of sexual misconduct charge at court-martial. This is standard practice, money for false sex accusations!

Nearly four years after simply asking his “wife” for a divorce the army escalated his case into a major felony criminal trial; a court-martial in which 90% of his defense evidence and witnesses were kept from the eyes and ears of the jury. Despite Kit’s great difficulty in merely presenting a fair and adequate defense, he was acquitted of all false and manufactured sexual misconduct charges, and despite the stacking of charges, he was convicted of only misdemeanor offenses. He now enjoys his freedom with his family, but it came at a tremendous cost, a dishonorable discharge, prison time, and forfeiting everything he had worked for over 30 years.

Unfortunately, this is an all too common occurrence to those who serve. One phone call and a service member’s life can be destroyed. Kit’s experience is not an exception, but rather the rule. The general public is unaware of the complexity and ferocity of the military’s new prosecutorial machine when the allegations involve any type of sexual misconduct. The concept of constitutional protections and due process are virtually non-existent. Once an allegation is made, regardless of its truth or veracity, the process is launched with the ultimate goal of obtaining convictions at any and all costs, and by any means necessary.

Is this the type of military justice that should be allowed in the United States of America? Shouldn’t our service members be afforded the same constitutional and due process protections that they fight and many die for? That should be an easy question.

Please, give our military veterans the same legal rights as those they defend- a trial by twelve peers that requires a unanimous decision of guilt. Stop rewarding false accusers. Remove the military from sexual assault cases, they cannot be trusted.