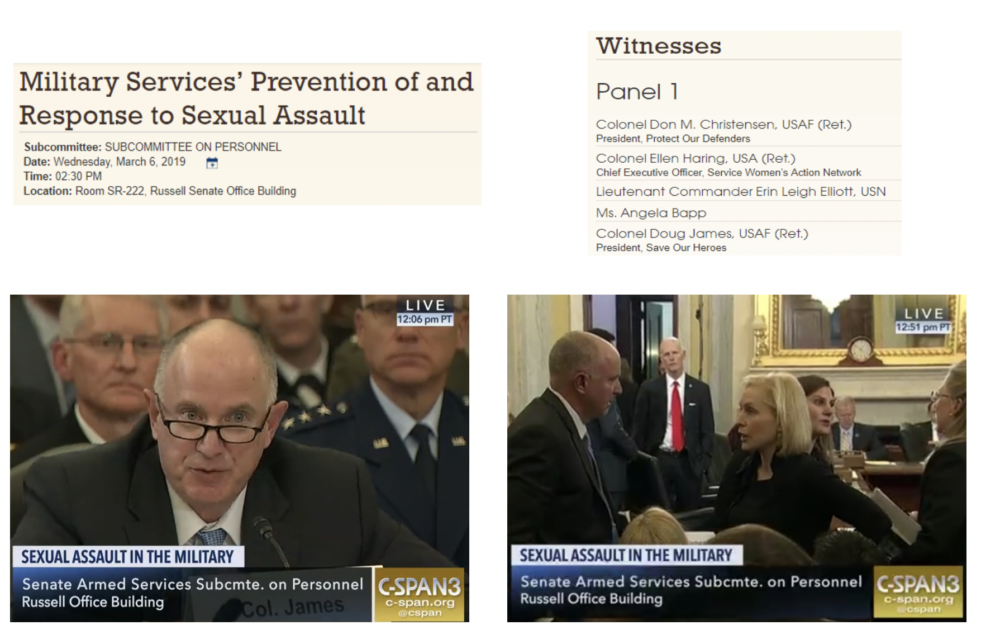 On Wednesday, March 6, 2019, Save Our Heroes’ President and retired Air Force Colonel Doug James testified before the Senate Armed Services Committee, Sub-Committee on Personnel on sexual assault in the military . Please refer to the video link provided by C-SPAN and Colonel James’ testimony begins at the 34-minute mark. Colonel James can also be seen again at the 1 hour 14-minute mark.

There was testimony from some of the speakers who were victims of sexual assault, describing their experiences including retaliation they faced. One member of the committee also described her experience with sexual assault in the military.

Senator Martha McSally described how she had also been the victim of a sexual assault while in the Air Force by a superior officer. Senator McSally described her experience and her decision not to report the assault as she did not trust the system .

A significant period of time was spent discussing and debating the issue of removing commanders from the decision-making process. The issue of the low rate of convictions for sexual assault was also discussed.

While Colonel James did not have a lot of time to bring up some of the points that SOH has been raising for some time, he did bring to the attention of the committee the issue of false allegations, military law enforcement and prosecutorial misconduct and unlawful command influence.

Colonel James discussed SOH’s experience, having received more than 300 cases since our inception in 2015, that the majority involve false allegations during contentious divorce proceedings or the break-up of a relationship. He also pointed to the frequency of false allegations for the purposes of obtaining a preferential duty station assignment. There are a host of motives for filing false allegations, including psychological issues, or to obtain immunity from one’s own misconduct.

While we could discuss and debate for hours, many of the problems on how sexual misconduct cases are handled in the military, the reality is that the problem has not been factually reported.

Currently, some in the legislature and some special interest groups have labeled the sexual misconduct problem in the military as an ‘epidemic.’ That is not quite accurate. In 2012, a defense contractor developed an anonymous survey for the Department of Defense which can be found online. There are many reports and calculations with various documents exceeding 700 pages each.

Now, just think about that for a moment and utilize a modicum of common sense. Does anyone actually believe that the military’s sexual assault rate is 30 times higher that the City of Detroit? Just as the false statistic that 1 in 5 female college students would experience sexual assault during their time in college has been debunked countless times over. Not only has that absurd statistic been debunked exponentially, but during 2015, 89% of all colleges nation wide had no reports of sexual assault .

The point is that in order to solve the problem of sexual assault in the military, legislators must be honest as to the extent of the actual problem. Rather than hysterics and histrionics at the helm of the discussion, honest and rational debate must take place.

For any person to state that there is an epidemic of sexual assault in the military is an insult. While some bad actors get into various professions and institutions, the vast overwhelming majority of people entering military service are honorable and decent people. They also go through background checks; criminal history checks and are fingerprinted. For those entering sensitive positions, the vetting process is even more stringent.

Save Our Heroes’ fully supports sexual assault victims and is very concerned with the problem of retaliation. When perpetrators are identified and an unbiased investigation is conducted, respecting due process and the constitution, then those found to be responsible should and must be held to account.

Senator Tillis made some positive statements in the hearing, that while we wish to eliminate the problem of sexual assault, we must also consider the rights of the accused.

Senator Gillibrand stated that she was also concerned about the issue of retaliation and that it is just as egregious for a guilty man to go free as it is for an innocent man to be convicted. Senator Gillibrand’s positive comments, concerning the innocent was a refreshing and needed statement and we hope to find some common ground, and work with her in the future, to address false allegations and wrongful convictions.

What Colonel James brought to the table at the hearing was educating the committee members that injustices occur, that false allegations occur. Realistically, while we need to have rational discussion and debate about the sexual misconduct problem in the military, those discussions must also include false allegations, prosecutorial misconduct, unlawful command influence, as well as holding false accusers accountable, and those who abuse and pervert the military justice system.

Colonel James also provided a written opening statement  prior to his testimony, where he reiterated Save Our Heroes’ opinion that the current manner in which the military conducts investigations and prosecutions of sexual misconduct cases is not working, and as such, is a threat to national security.

There are a host of various reasons and in almost all of our vetted cases, and there is some component of the above or a combination of several of those motives.

Let’s not forget that a significant level of false allegations are made for the purposes of financial gain; either in the dissolution of a marriage, a break-up, or to obtain lavish transitional compensation packages or V.A. benefits. The problem of making false allegations for financial gain is so prevalent and extensive, that we have discovered over two dozen web sites, Facebook pages, and chat rooms where open discussion occurs on how to defraud these benefit programs. Furthermore, a number of civilian criminal defense attorneys who practice military law, either employ social media investigators or similar firms where public social media statements are made by false accusers, boasting and bragging on how they defrauded the system.

As our nation was witness to a recent sensationalized hate crime hoax, and some in the legislature, some in the news media immediately rushed to judgment, and millions of people were labeled and slandered. A detailed investigation revealed that the entire event was staged and planned ahead of time. When the facts came to light, some of those rushing to judgment have remained silent.
It is hoped is that the committee members come to the realization that not all persons who report crimes are telling the truth. We also hope that the committee members realize that in many instances of investigating and prosecuting allegations of sexual misconduct, that officials in that process don’t always act in an ethical manner.

There is also the cost to the American taxpayer. In just one false allegation case that SOH investigated, we opine that the waste to the taxpayer was in excess of two million dollars, factoring in the number of professionals working the case and the labor hours expended. SOH opines that the waste and fraud of investigating false allegations, and fraudulent claims exceeds several hundred million dollars a year.

The effects on the falsely accused and wrongfully convicted are astronomical. There is professional condemnation, family disintegration, financial ruin, and sadly, in some cases, suicide. Even if completely exonerated during the investigative stage or at court martial, the falsely accused will most likely face some type of administrative action, including separation.

Legislators who are concerned with the issue of military and veteran suicides must also come to the realization that in some cases of suicide, they occur because of the current state of hopelessness, that service members face when falsely accused or wrongfully convicted of sexual misconduct violations, or veterans who are facing the after effects of being wrongfully convicted, incarcerated, and unjustly separated from the military with little to no hope of a future productive life.

While many areas of the military justice system require reform, there are three primary areas which should be immediately addressed, and which Colonel James described.

Currently, there is no accountability in the military for persons who make false allegations of sexual assault. Even when it is unequivocal, through facts and evidence, that the accuser knowingly and intentionally manufactured sexual assault allegations, they are never sanctioned. They are still permitted expedited transfers and are still fraudulently obtaining benefits. Currently, there are a plethora of briefings, orders, memos, signage and other programs mandating the need to eliminate sexual harassment and assault, yet not one word is spoken regarding the issue of false allegations, and the destructiveness for many involved.

The Immediate Need for a Conviction Integrity & Accountability Unit

The Department of Defense must consider the immediate implementation of a Conviction Integrity & Accountability Unit, to not only review obvious cases of false allegations and wrongful convictions as SOH has seen and received, but to also mandate sanctions for those who falsely accuse, and those officials in the process and chain of command who facilitate these kinds of injustices, including the issue of all forms retaliation.

Currently, there are a glut of sexual misconduct cases that are being preferred to court martial by convening authorities in which it is obvious from the beginning that the cases involve false allegations or are not supported by probable cause. These cases are going to trial anyway. The primary reason is the fact that if a convening authority does not prefer one of these cases, they will most likely be flagged and their next promotion or assignment will he held up by the Committee, by the vote of one member. This potential career ending practice must stop. Until such time as a permanent solution can be found and decided upon, convening authorities should not have to face potential career ending consequences for lawfully and correctly exercising their authority.

We must restore due process, the rule of law, and abide by the constitution when faced with these kinds of allegations in the military and eliminate the emotional response to convict and punish without the benefit of facts, logic, due process, and political pressure.

Our service members and their families serve this country at great sacrifice to them, sometimes giving their lives to protect and maintain our freedoms and our constitution. They should be afforded the same rights that some have given their lives for.

By Save Our Heros|March 13th, 2019|Senate Armed Services Committee|1 Comment