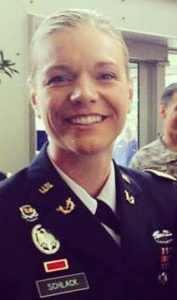 Based on the complexity of the alleged violations, and in addition to filing the complaint with the Commonwealth of Kentucky where Major Schlack is licensed, several other oversight bodies were included in the complaint.

One of the oversight bodies; and which federal law explicitly states that anyone violating this section shall be subject to a court-martial and shall be dismissed from the military, is the U.S. Office of Special Counsel, Hatch Act Unit [i]. As revealed in the attached complaint cover letter and depicted below, Major Schlack, then a Captain, went on Facebook rant directed at U.S. Senator Kirsten Gillibrand. 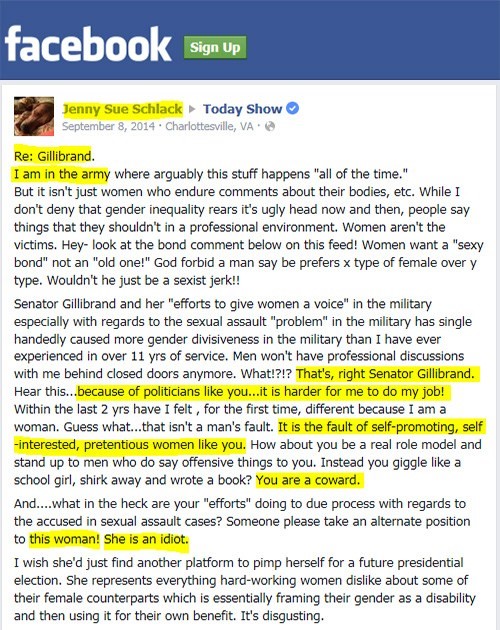 The ‘Hatch Act,’ which was passed in 1939, is a piece of United States federal legislation which prohibits federal employees, employees of the District of Columbia and certain employees of state and local governments from engaging in partisan political activity.  The Act was named after Senator Carl Hatch of New Mexico, [i] and includes certain restrictions for members of the Armed Forces, requiring them to state that their political opinions are of their own and not that of the military. One seemingly minor detail that Ms. Schlack forgot to include, which is just one alleged violation that should ensure her dishonorable discharge (dismissal) from the military, and hopefully her disbarment from the practice of law.

Besides the obvious grammatical errors which should be embarrassing to any individual who supposedly possesses a Juris Doctorate degree and has allegedly passed a state bar examination, then Captain Schlack lashed out in an unbridled fit of rage, labeled Senator Gillibrand as ‘self-interested,’ ‘pretentious,’ a ‘coward,’ and an ‘idiot.’

It could not be determined if Schlack was under the influence of any type of narcotic or alcohol when she clearly identified herself as a member of the U.S. Army, or if she was experiencing some type of delusion. In her rant, she did come out and say what we have all been saying all along, that the U.S. military is a toxic work environment for males, and admitted that her male colleagues will not have any type of closed door professional conversation with her, making it more difficult for her to do her job.

The contemptuous language directed towards a sitting member of the U.S. Senate is enumerated in Title 10, U.S. Code, § 888, or Article 88, UCMJ – Contempt Toward Officials. The section specifically states that the offender, SHALL be punished as a court-martial may direct, and that the person charged under this section, SHALL be dismissed from the armed forces, asked to forfeit all allowances and pay, and be confined for one year.

In 2012, 9-year Camp Pendleton Marine Corps Sergeant Gary Stein was forced from the Marines, receiving an ‘Other than Honorable Discharge,’ losing all benefits for negative Facebook postings that were directed at the President. [ii] [iii] Thus, the precedent has already been set; that a member of the U.S. military has been forcibly discharged under this section. SOH can hope that Major Schlack faces the same fate as Sergeant Stein, otherwise it would appear to be a violation of the 14th Amendment of the Constitution [iv], guaranteeing equal protection under the law.

In addition to the childish rant directed at Senator Gillibrand, Major Schlack was also the subject of a prior Kentucky State Bar complaint filed by Major ‘Kit” Martin, a case which SOH has profiled extensively and which has nearly 100 articles on several different websites.

This is just one of countless examples of the unethical conduct that military prosecutors and law enforcement agents routinely employ, to ensure some type of conviction in cases involving allegations of sexual misconduct [v].

It seems as though Schlack is no stranger to using deceptive techniques and inflammatory language. In early 2016, Major Schlack; in her capacity as a Special Victim Prosecutor, prosecuted the case of West Point Cadet Lukas Saul [vi]. Saul was found to be not guilty, but Schlack and other prosecutors ignored requests by Saul’s defense counsel, and fought vigorously to keep out of evidence, a series of text messages proving his innocence, claiming that they were hearsay evidence. After contentious courtroom debate, the text messages; obtained by defense counsel, were eventually allowed into evidence and Saul was acquitted.

“West Point takes all allegations very seriously, in this particular case, a court-martial was held to find the truth, and the panel has determined Cadet Saul is innocent of all charges. All the facts were presented in a full and open hearing and the issue was resolved in a manner consistent with military law and due process requirements.”

On the contrary. The court-martial of Saul was not to determine the truth, but rather to suppress the truth to ensure a conviction. Why did investigators and the prosecution ignore requests by defense counsel to subpoena or request Saul’s text messages? Why was it necessary for Saul’s defense counsel to obtain evidence of innocence when it should have been done during the investigative stage? Why did they fight so ferociously to keep those text messages from the eyes and ears of the panel (jury)?

During the court-martial, Prosecutor Schlack using inflammatory language, described Saul as a Jekyll-and-Hyde [vii] type with a darker side he showed behind closed doors, but apparently failed to notice text messages from the accuser to Saul for 69 days after the alleged incident that revealed that she was still in love with him.

This is not an isolated incident. In fact, it is the normal routine pattern and practice of military justice, primarily in cases involving sexual misconduct. Ignoring evidence of innocence, suppressing evidence of innocence, threatening defense witnesses, providing for lucrative transitional compensation packages, providing Special Victim Advocates (attorneys) for alleged victims; all at taxpayer expense. If this occurred in the NYPD in the heyday of ‘The Knapp Commission [viii],’ and whistleblower NYPD Detective Frank Serpico; those involved would have been prosecuted for bribery and corruption.

What male service members are now facing; is in effect, a phenomenon similar to the “Black Codes,’ or ‘Jim Crow’ laws that were established shortly after the Reconstruction period, until they were abolished with the passage of the Civil Rights Act of 1964. During that time-period, it was not uncommon for black males to be beaten or hung, simply with an allegation of rape by a white female.

While male service members are not beaten, and hanged in the current ‘witch-hunt,’ the similar patterns of guilt by mere accusation seems to be the norm. As we have seen many times over, once an allegation has been levied, all forms of investigative and prosecutorial efforts; are by design, to accomplish the ultimate objective of a conviction, by any means necessary. The trail of military prosecutorial and law enforcement abuse and misconduct is long, and shows no sign of letting up.

Save Our Heroes’ is fully aware that sexual assaults in the military do happen, and when evidence of those crimes is present, those offenders should and must be held accountable in accordance with all applicable laws, with all due respect to the constitution and due process. If we deviate from that, we are nothing more than a third-world banana republic.

It can be safe to say that the current military justice system; primarily in cases involving sexual misconduct is in a stage similar to that of the Russian ‘October Revolution’ during the time of Stalin, up until the period known as the ‘Khrushchev Thaw,’ when millions were sent to the ‘Gulags’ upon the mere suggestion of political indifference.

Where most who were sent to the Gulags never came back alive, many U.S. service members who are wrongfully convicted wind up with prison sentences, that in effect, can be life sentences.

There are many more issues involving Major Schlack that were enumerated in the lengthy addendum and attachments to the complaint that total more than sixty pages; some of which can be verified through the recovery of electronic evidence that is not subject to tampering. Not all will be revealed here so as to protect the integrity of the information as well as potential witnesses who have provided information.

Perhaps, some of those in the Pentagon will soon realize that a prosecutorial witch hunt monster has been developed, a significant portion of which has occurred in the last eight years.

As the attached cover letter reflects 161116-soh-bar-complaint-filed-jenny-schlack, the complaint was also sent to the DoD, Standards of Conduct Office, the USDOJ Civil Rights Division, and the commander of Fort Drum New York, Major General Jeffery Bannister. With so many entities involved; now with knowledge of these violations by Schlack, it should be very difficult for any one entity or all of them to ‘sweep this under the rug.’

Save Our Heroes’ has received information and official documents on many other similar cases, and once those cases are vetted, and if and when verifiable instances of military prosecutorial or law enforcement misconduct, or criminal conduct is discovered, SOH is dedicated to aggressively pursuing similar complaints.

If Save Our Heroes’ is made aware or learns of any sanctions regarding Major Jenny Sue Schlack, we will bring that information to our readers.

By Save Our Heros|November 27th, 2016|General|Comments Off on Save Our Heroes’ Files Complaint of Army JAG Special Victim Prosecutor Major Jenny Sue Schlack