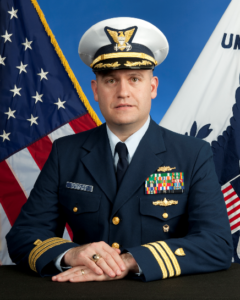 Commander Ben Strickland was raised in a maritime family. His father served as a Boatswains Mate in the U.S. Navy during the Korean War, as a licensed Master Mariner in the U.S. Merchant Marine, and a Marine Salvage expert. Commander Strickland himself holds an active merchant marine license and is a 1995 graduate of Maine Maritime Academy where he was commissioned an Ensign in the U.S. Navy, serving for three years as a Surface Warfare Officer. Commander Strickland then transferred to the U.S. Coast Guard where he continued specializing in surface operations and marine safety. The Commander deployed twice to the U.S. Central Command area of operations, as well as has extensive time serving in the Western Pacific on six different Navy and Coast Guard ships. He is a graduate of the United States Naval War College where he obtained a Master’s Degree in National Security and Strategic Studies. He is married with a beautiful wife and three children. Commander Strickland had a stellar military record with outstanding officer evaluation reports, and multiple personal decorations for performance of duty until one day a subordinate came to him for help.

Commander Strickland was serving as the Acting Commanding Officer of USCGC MUNRO (WHEC-724) homeported in Kodiak, Alaska when in late May, 2013 a young female Seaman came to see him in his conference room. The Seaman indicated she had been the victim of a sexual assault by a male shipmate (of the same grade, E-3). Commander Strickland executed a “textbook correct” response in accordance with Coast Guard policy, ensuring the victim received the proper support services from the local Sexual Assault Response Coordinator (SARC). Commander Strickland then made the required reports to his immediate superior in command Admiral Paul Zukunft, and under his authority as Acting Commanding Officer predicated an investigation by Coast Guard Investigative Service (CGIS) into the facts and circumstances surrounding the alleged sexual assault(s). Unknown to him, his report of a sexual assault put a target right on his back and would DIRECTLY result in reprisal termination from his duties seven months later. Rather than focus on a fair and factual investigation of the sexual assault allegations that he had brought to their attention in the first place, senior Coast Guard Officials and CGIS sought to retaliate against Commander Strickland in retribution for his report, as well as his subsequent complaints of gross mismanagement of the same investigation. When they struck against Commander Strickland months later, the suspect still had yet to even be charged with any wrongdoing by the Coast Guard investigation and legal staff!

Commander Strickland filed a formal whistleblower retaliation complaint with the Office of Inspector General against Admiral Zukunft as well as multiple other Coast Guard officials who orchestrated, participated in, or condoned multiple prohibited personnel practices against him (to include a derogatory evaluation and demotion) in reprisal for his whistleblowing activity. The Coast Guard denied retaliation on their part and had the audacity to formally claim in writing that Commander Strickland was not eligible for whistleblower protection under the Military Whistleblower Protection Act. After pursuing the excessively limited avenues available to military members for redress and facing continued adverse personnel actions against him despite his active compliant with the Inspector General, Commander Strickland retired in October 2015. His application with the Board for Correction of Military Records (BCMR) to reverse the Coast Guard’s retaliation and clear his name pends.

Learn more about the case of CDR Strickland at

By Save Our Heros|October 16th, 2016|Military Investigations, Military Justice, Military News|Comments Off on Reprisal: The Case of U.S. Coast Guard Commander Ben Strickland