Previous Next
The Real NCIS & JAG 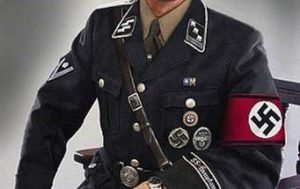 After a long day at work many of us like to watch a little TV. One option available to us is NCIS and its spin offs. These are an extension of the 90’s show JAG that was so popular. In these episodes, we get to watch good looking actors portraying American heroes fighting to expose evil plots against our country. They capture spies and murderers and do it with zippy punch lines. In between action shots the characters are made more interesting with humorous interaction and underlying sexual innuendos. It’s all designed to give you that “warm fuzzy” of the movie Top Gun. In the show JAG, our hero would even jump back and forth between being a crime fighting lawyer and an F-14 fighter pilot just like “Maverick.” It may have been entertaining, but those of us in the military were laughing at the absurdity of it. With the current witch hunt against veterans, we’re not laughing anymore.

The culture of the JAG and NCIS of today is more closely related to Nazi Stormtroopers than crime fighting “heroes.” Instead of jack boots and black uniforms they wear polo shirts and sunglasses, but they are just as dangerous and they will swarm you with guns drawn if they can. The same is true for the Army and Air Force equivalents of CID and OSI. These organizations have a new mandate- victim centered investigations. [1] [2] This may sound like a noble cause, but what it really means is that anyone that makes an accusation of sexual assault or harassment against a military service member is to be believed, no matter what. This is also one of those ironic contradictions given the underlying core of both shows, NCIS and JAG, revolve around constant sexual bantering and illicit relationships between characters. Mark Harmon’s lead character in NCIS has slept with his supervisor and in the episode “Driven” [3] the show even makes fun of military sexual assault training (https://www.youtube.com/watch?v=oCp9RGGliDQ).

The Real NCIS and JAG however, are now focused on a sexual assault crusade. Convictions, by any means necessary is the ultimate goal. Even when hard evidence shows the accuser to be lying, the charges will go forward and the “victim” will automatically be afforded special protections and provided with generous transitional compensation packages.[4] The government has an almost endless amount of resources and specialists that are paid to explain inconsistent testimony and statements of accusers. In a court martial it doesn’t really matter anyway, because the whole process is designed to convict and prosecutors will use every means at their disposal to block the truth from being presented.[5] [6]

As a result of these incentives and DoD sexual assault awareness programs, false accusations are at an all-time high. This is despite the fact that national crime statistics show sexual assault is at a 24-year low. [7] [8] So how did this come about? There are many reasons, including a proposed virtual elimination of the JAG Corps, but a key event occurred in 2011.

Then Air Force Lieutenant General Franklin overturned the sexual assault conviction of a pilot named Lieutenant Colonel James Wilkerson, after carefully reviewing all reports, the record of the court-martial, and after consulting with his legal staff. Several politicians and special interest groups jumped on this decision to support the narrative of a sexual assault epidemic in the military. They used the Wilkerson case as an example of a broken military judicial system. The otherwise distinguished and honorable career of LTG Franklin was cut short as a result.[9]

A key legislative proposal; the Military Justice Improvement Act, was introduced with one of the provisions to eliminate the commander’s authority from the decision-making process in a number of serious crimes; particularly, sexual assault allegations. The foundation was now set, fueled by a false political narrative, to obtain convictions by any means necessary. Lower ranking enlisted service members; primarily men, were particularly affected.

Any commander that spoke out against this appeasement policy were quickly relieved or retired by the current administration.[10] Likewise, any JAG attorneys that were willing to do their ethical duty and oppose this new policy, like Special Victim Prosecutor Major Eric Burris [11], were framed and sent to Leavenworth. The message was clear, get on board or be sacrificed too.

Over the last seven years this has resulted in the net effect of a “guilty until proven guilty” mindset among JAG prosecutors and military law enforcement agents. If a veteran or service member is accused, they are immediately labeled as sex offenders and flagged by their command. They are then ostracized, their careers are ruined, and JAG and NCIS/OSI/CID storm troopers will swing into action. They will do everything in their power to find a means of convicting them.

The first tactic is to try and strong arm them into a confession with tactics any Gestapo agent would admire. If this fails, then they will look for other service members they can threaten, possibly with charges, to make negative statements. This is often targeted at witnesses for the accused, the ones that could reveal the truth. Agents will also track down every past relationship the service member ever had looking for a disgruntled “ex.” Agents will then approach the ex, and claim their former lover is a rapist and/or child molester. Agents will then describe the victim rewards system that now exists with thousands of tax payer dollars and benefits available.[12] Once the ex has been sufficiently prepped, they will then be asked “Where you ever a victim? Did he ever assault you or your children?” ($$$!)

Once the trap has been closed and the veteran has been charged, regardless of evidence, they will be appointed a single young JAG defense lawyer. This JAG lawyer is doing his penance before getting to be a prosecutor. The objective at this point is to get the service member to accept a plea deal and admit guilt. With the current 550% increase in sex related court-martials, the system just can’t handle the number of cases that exist. This ties into another reason for this campaign, the JAG Corps is no longer on the chopping block. In fact, it is one of the only expanding branches with almost unlimited resources. This is occurring while the rest of the military is facing major cuts.

When a young private or sergeant is told by their “lawyer,” usually a new captain, that they are facing life in prison or they can take a plea deal, sealing the agreement of a conviction usually isn’t too hard. Enlisted Soldiers are easy victims. They have also been trained to follow the orders of senior officers. They are young, inexperienced, and far from home. They don’t have the money for a real lawyer or an investigator of their own. They have one young lawyer versus teams of specially trained prosecutors and investigators.

The last step in the process is to get them to agree to a trial by judge alone. The last nail in their coffin comes when the judge convicts them to years in prison, but usually a little bit more than the plea deal. It makes them feel the plea deal was a good idea. What it really did was fast track the service member into prison and make an appeal almost impossible, after all, they plead guilty.

There is no doubt that sexual assaults and sexual harassment occur in the military, but if you believe the numbers and extrapolated statistics that are being thrown around by those pushing the political narrative; in realistic terms, you would have to believe that a female service member has a greater chance of being sexually assaulted in the military, than if she walked around naked with a neon sign at 3 am in the City of Detroit. Does that really make sense?

To understand more please read “Betrayed” and “The Secret War” and support the non-profit Save Our Heroes.  http://www.saveourheroesproject.com/

By Save Our Heros|December 16th, 2016|Military News|Comments Off on The Real NCIS & JAG