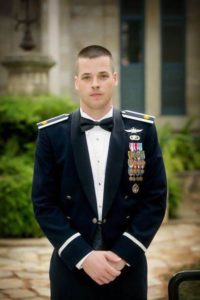 Major Michael Turpiano comes from a long line of family members who have defended and protected America. His father Jim, a Vietnam veteran and retired Army officer, was Michael’s inspiration to serve his country. Michael followed in his father’s footsteps by fighting in two American wars/conflicts himself in both Iraq and Afghanistan. Michael spent over three years of his life in combat zones.

Michael has served in the Air Force for over 19 years, since he enlisted at 17. He served in many roles to include a Commander, Combat Advisor, Intelligence Officer, Acquisition Officer and Communications Operator. From his time fighting for America in Iraq and Afghanistan, it is documented in his military records of his performance that he participated 355 combat missions and endured 105 enemy engagements. It is also documented that he directly saved the lives of four civilians and a fellow military service member. Michael’s amazing record earned him top marks during his last promotion board in which he was selected to attend Air Command and Staff College; an honor reserved among the very best officers the Air Force has to offer.

As a highly decorated combat veteran, Michael found himself facing the most difficult crisis in his life; a false rape allegation by Kristen Margaret Parks a spiteful ex-girlfriend. Michael was acquitted at court martial of this vengeful false allegation. Michael’s ex-girlfriend concocted the false allegation after Michael ended their relationship. Her blatantly false allegation was recommended for dismissal by a military judge prior to the court martial, but was forced forward to trial by Michael’s commanding General. In the military, commanders with no legal training and political motivations hold the authority to send charges to trial regardless of a federal judge’s recommendation.

Kristen is a known serial false-accuser. In fact, Michael was Kristen’s third victim and second ex-boyfriend, whom she falsely accused within a one year period. Additionally, Michael passed a polygraph prior to trial to further prove his innocence against the false allegation. Despite the acquittal, Michael still found himself wrongfully convicted of two unrelated, collateral charges of assault consummated by a battery. Specifically, he was wrongfully convicted of consensual dancing with Kristen’s best friend, Captain Rachael L. Holderle in a nightclub and hugging a mutual friend of theirs Captain Christina A. Estrada. It wasn’t until months after these supposed crimes, both Rachael and Christina later became offended at the alleged contact after learning Michael was accused of raping their friend. He was sentenced to 3 months in prison, forfeit of three months’ pay, and received a dismissal/dishonorable discharge from the military. Both of Michael’s convictions were based purely on the impeached “perjured” at trial testimony of both Rachael and Christina. Despite the crowded locations of these alleged offenses, the government was unable to produce a single corroborating witness to either accusation that a crime had occurred. In contrast, Michael’s defense discovered multiple witnesses who fully exonerate him of both charges. Also, both locations had uniformed police officers and bouncers who witnessed no assault or received a single complaint. These additional allegations were not fabricated by Rachael and Christina until Air Force Office of Special Investigations (AFOSI) conducted an unethical/illegal investigation against Michael in an attempt to ensure a conviction.

At trial Michael testified in his own defense the allegations were false. In regards to the dancing charge, a witness corroborated Michael’s testimony. The defense also produced photo evidence which showed Michael’s false accusers were lying. Since the trial, multiple eyewitnesses have come forward to provide sworn statements that Michael is innocent of both of his wrongful convictions. Many of the witnesses cite threats from AFOSI, Special Agent Shawn Arter and/or the Lackland AFB prosecutors as to why they did not come forward earlier. It is also important to note that Michael passed polygraphs in regards to both the dancing and the hug conviction after his release from prison. Also, it is highly unlikely that either of these convictions would even be considered a crime in any other court in America.

The political military witch-hunt against Michael sought to punish him, regardless of how blatantly false and ridiculous those allegations were. Facts and evidence were completely disregarded in order to further a political agenda. Some alleged victims/witnesses were held in military interrogation rooms for up to 13 hours, and others were threatened with criminal charges of their own unless they implicated Michael in a crime. Out of fear, some of these witnesses complied, but later recanted their false statements. Also, the Lackland prosecution lawyers Captain Mark Schwartz and Captain Vernisha Foster hid evidence from Michael’s defense team that would have exonerated him.

The case of Major Michael Turpiano is the perfect storm of false allegations, corrupt military investigators, misguided commanders and prosecutorial misconduct. The accounts of his story can be easily compared to the Duke Lacrosse scandal and the Rolling Stone, University of Virginia (UVA) Jackie story, except that his story ended far more tragically for this HERO!

Read More about the Wrongful Conviction of Major Michael Turpiano below…

How to Destroy an Air Force Officer With Four Words: the Case of Maj. Michael Turpiano

“That’s What I Wrote.” The Incredible Witness Testimony that Condemned an Air Force Major