To the Tennessee Board of Professional Responsibility, and the U.S. Department of Justice, Criminal Section, Civil Rights Division,

Save Our Heroes (SOH) is a 501(c)(3) nonprofit organization founded in 2015, and is devoted to passionately advocating, supporting, and helping military service members and their families, who are facing false allegations, wrongful military judicial action, and those who have been wrongfully convicted.

Our Directors, Advisors, and Volunteers are men and women from a wide variety of professions; including current, former, and retired military members from all branches.

In a cooperative effort with similar organizations, we advocate on pending cases, work towards fact and evidence based solutions to improve and reform the military justice system, and to prevent future injustices and abuses. You can learn more about SOH, our interests and efforts, by visiting our website, www.saveourheroesproject.com.

The violations include, State of Tennessee; Rule 8, Rules of Professional Conduct, specifically Rule 3.8, Special Responsibilities of a Prosecutor, and potentially include, but are not limited to, the following federal criminal law violations.

The specific issues involve Attorney Bashore’s prosecution of an innocent man of a violation of sexual assault, in November of 2015, at Fort Campbell, Kentucky.

The court-martial case of the U.S. v. Mario Jeffers, formerly a Sergeant in the 101st Airborne Division was pursued by Attorney Bashore, even though the allegations had been proven false by local law enforcement, and the alleged victim made a videotaped admission, in the presence of a Clarksville Tennessee police department detective and an Army CID Special Agent, that no crime had been committed and that the sex between her and Mario Jeffers was in fact, consensual.

Below is an excerpt from Clarksville Tennessee Police Detective Dennis Honholt’s police report dated August 4, 2014 wherein he states that the alleged sexual assault victim in this case; Jacita Upshaw, admitted that act was consensual and determined that Upshaw’s allegation was unfounded.

Even though Upshaw made a videotaped admission to Detective Honholt; in the presence of an unnamed Fort Campbell CID Agent, the U.S. Army, and specifically Attorney Jacob Bashore in his official capacity as a Special Victim Prosecutor, pursued criminal charges against Sergeant

Jeffers and he was convicted on November 12, 2015 and was sentenced to six years’ confinement.

Attorney Bashore pursued the sexual assault allegation against Sergeant Jeffers, even though an Article 32 (preliminary hearing) officer; Captain Patrick Sweeney determined that the evidence in the case did not support a finding of probable cause that Sergeant Jeffers committed the charged offense, as indicated by an excerpt of the Article 32 report. 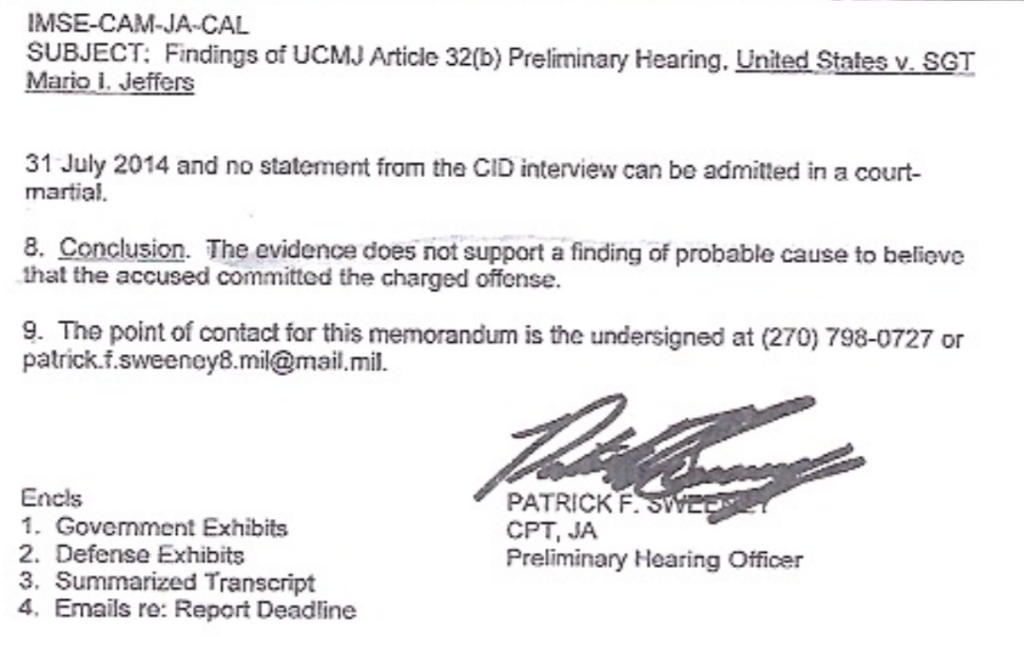 An investigation by SOH reveals that the alleged victim in this case; Jacita Upshaw had been experiencing disciplinary problems and was expected to be deployed, and in order to be excused from the pending deployment, to potentially excuse her own misconduct, and to obtain a more preferable duty assignment, she made the same allegation to Army authorities; the same allegation that she had admitted was false to the Clarksville Police Department.

As such, Mario Jeffers has been confined at the U.S. Detention Barracks in Leavenworth Kansas, currently serving a six-year sentence.

Save Our Heroes’ is aware that there have been several prior complaints involving Attorney Bashore; primarily his pattern and practice of prosecuting soldiers for violations of sexual misconduct in which insufficient probable cause exists, or are simply false.

As a result of Attorney Bashore’s intentional misconduct and potential criminal conduct, SOH respectfully demands that the Tennessee Board of Professional Responsibility, immediately initiate an inquiry into this case.

The evidence provided here explicitly states that no crime occurred and it is incumbent upon the Tennessee Board of Professional Responsibility to take the necessary legal steps to procure the release of Mario Jeffers who has now been languishing in custody for approximately one year.

Pursuant to normal business practices, it is respectfully requested that the Tennessee Board of Professional Responsibility respond to SOH President Michael Turpiano