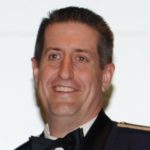 Colonel Christopher Huisman has been described as a snake by some of his subordinates and it stands for good reason.

“Not long after the inquiry opened, Colonel Christopher Huisman, commander of the squadron to which Turpiano (as well as his accuser and virtually every other witness in the case) belonged, issued a broad no-contact order. The directive contained a list of 38 names, preventing Turpiano from enlisting witnesses in his defense. It also had the effect of knocking him out of training just a few days short of graduation and professionally damaging him long before a single charge had been filed.

After Colonel Huisman’s gag order, which isolated Turpiano from his support system and inhibited his defense preparations.

One witness claimed in a sworn statement that most of her interrogation occurred before she was advised of her rights. She repeatedly requested counsel both before and after rights advisement and was denied access to counsel by the agents. At one point, in a truly bizarre development, squadron commander Colonel Huisman was brought into the interview room in uniform to assist with the interrogation.

Additionally, not long after the investigation began, Turpiano was informed by the intelligence officer course director, Capt. Bizko, that his training report had been downgraded by Colonel Huisman for “disciplinary reasons.” When Turpiano’s lawyers reached out to Bizko for a statement about the matter, Bizko responded that he’d been ordered by Wing Commander Col. Kimberly Joos to refrain from talking to Turpiano or his lawyers. The mind boggles to comprehend what military necessity could underpin the legality of such an order. Then again, Air Force command authority has long since slipped the surly bonds, escaping any measurable limit apart from that imposed by the power and privilege of superior rank. Many philosophers and historians have written many volumes about such systems. None have happy endings.” (JQP)

Read More at “How to Destroy an Air Force Officer With Four Words: the Case of Maj. Michael Turpiano” http://www.jqpublicblog.com/how-to-destroy-a-fellow-airman-in-four-words-the/

By Save Our Heros|April 25th, 2016|Military Investigations, Military Justice|3 Comments