Save Our Heroes has conducted an in-depth investigation of a case involving former Marine, Kathleen Fisher, also known as Kathleen Konicki of Jacksonville North Carolina, who accused a serviceman of sexual assault, and which the official documents and evidence reveal, did not happen. 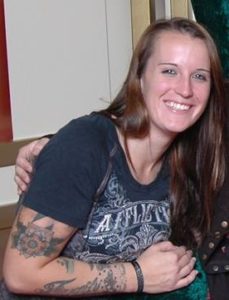 Our inquiry spanned the review of several thousand pages of information and numerous interviews. As such, SOH filed a complaint with the FBI Field Office in Charlotte North Carolina; the field office that covers the area where Fisher-Konicki resides, and the V.A. Office of Inspector General in Washington DC, respectfully requesting a criminal investigation.  (A copy of the cover letter can be obtained here.) 170807 FBI & VA Cover Letter

A partial list of the federal criminal law violations that Kathleen Fisher may have committed, include, but are not limited to the following

In 2013, Kathleen Konicki, (now Fisher) then an E4 in the U.S. Marines reported that she was allegedly sexually assaulted and raped, accusing a U.S. serviceman of these crimes, six and nine months after the alleged occurrences.

As in any reported case of sexual misconduct, an exhaustive investigation was launched. An official military law enforcement investigation and defense investigation, ultimately determined that the allegations by Fisher were manufactured.  This was not a he-said, she-said case.  There was no case; it never happened, and evidence reveals that she just arbitrarily plucked a completely innocent serviceman at random, in order to launch her devious scheme to collect VA benefits.

Some of the comments from some of the official documents in the case are revealed below.

A female Staff Judge Advocate in charge of the facility where Konicki alleged she had been raped filed an Affidavit wherein she states in part;

K.K. “is among the most calculating, aggressive, and untruthful complaining witness[es] that I have ever observed.”

Other comments in official documents state;

“… you have overwhelming evidence that K.K. has a psychopathic personality, is manipulative and aggressive, is adept at exploiting loopholes and gaming the system, and is a brazen and pathological liar.”

“She travels to court appearances with an entourage and seems to bask in the attention. “

“A Con Artist with A Financial Motive “

The motive for her false allegations are clear; financial gain through fraudulent claims for benefits from the Veterans Administration.

Another statement in another official document in the case states;

Estimated and not counting for cost of living increases, Konicki would stand to receive over one million dollars in fraudulently obtained taxpayer benefits over the estimated course of a lifetime.

What is disconcerting and should also be of a major concern to taxpayers is the fact that perhaps as many as 200 individuals participated in some manner in the investigation of Fisher’s false claims. These include JAG personnel; prosecutors and defense counsel, military law enforcement agents, clerks, paralegals, staff, Department of Defense personnel, evidence technicians, various medical professionals, and a variety of civilian personnel.

The estimated costs to conduct this investigation could be in excess of one million dollars. SOH has also asked the Office of Inspector General to recover the costs associated with this investigation.  SOH believes that the larger fraud perpetrated upon the U.S. taxpayer, is the waste of perhaps, in excess of one million dollars in wasted labor hours and resources.  The evidence in this cases is epic and Fisher-Konicki; in addition to being held criminal responsible, must also be held accountable for the wasted funds and resources used to chase a non-existent rape case.

SOH now has over 200 cases involving false rape allegations and it is estimated that as many as 400 servicemen are currently languishing in military jails, having been wrongfully convicted of various false sexual misconduct violations. SOH opines and estimates, based on the data that we have compiled thus far, that over TWO BILLION taxpayer dollars a year are wasted on investigating false and fraudulent sexual misconduct allegations.

This seems to be a familiar pattern in which false allegations of sexual assault are used as a basis to petition for VA benefits. While some cases are legitimate, we opine that a significant number are not.

For example, official documents in this case reveal that a medical expert was brought in and testified as to the ease of obtaining VA benefits for PTSD due to MST. This medical expert is thoroughly familiar with the intricacies of this process, offered in part, the following statement;

“…… a copy of the report alone would qualify as adequate support for service connection,” he said, “often simply a copy of her orders showing she was ………………… would suffice.” In other words, her uncorroborated allegation, by default, gets her an initial 50% disability. The doctor told defense counsel, “it is standard procedure for the VA to upgrade it to 70% after a year if someone asks for an upgrade, without requiring any further documentation.” “PTSD is easy to fake,” the doctor said, because “All of the symptoms are subjective and you read about them online.” “And VA evaluators never bother to look for corroboration – they go by what the patient tells them,” Her medical retirement is based on a lie, and it is fraud. Unfortunately, our VA system has loopholes, and con artists usually excel at manipulating people and exploiting loopholes.

False sexual assault allegations in the military are at pandemic levels. Despite claims from the rape hysteric cottage industry, special interest groups and a handful of elected leaders, the proverbial red carpet is rolled out to those making allegations of sexual assault.  Expedited transfers occur almost overnight, they are immediately bestowed with a virtual army of advocates, counselors, attorneys, receive immediate monetary benefits, have VA claims processed almost overnight, and if they themselves are facing criminal or disciplinary actions, are immediately given immunity for any crimes or administrative actions that they may be facing.  Claims by some in the rape hysteric cottage industry that those making sexual assault allegations are routinely retaliated against are abjectly and strictly nonsense.

SOH believes that actual and true sexual assault victims should and must be afforded all resources and assistance needed, but in reality, the astronomical numbers of false allegations, and what seems to be the norm, has turned this entire process into a kangaroo court. The vast number of liars out there actually hurt those who have truly been victimized.

Kathleen Fisher has not yet been held accountable for this fraudulent sexual assault allegation. SOH is hopeful that the vast amount of information and evidence in this case will prompt a criminal probe, indictment, and prosecution.  If a fair and unbiased judicial proceeding is conducted; not unlike similar travesties of justice that we routinely see of those falsely accused, SOH opines that Fisher will be held accountable.

SOH made clear in our complaint package that it is quite likely that the serviceman in this case as well as any potential witnesses may experience some form of reprisal which may originate from some of the highest echelons of the federal government. The only true victim in this case is the serviceman whom Fisher falsely accused.

Some who have been falsely accused have initiated civil actions and just recently, a retired Army Colonel prevailed in such an action and was awarded an $8 Million Dollar civil judgment against his false accuser.

SOH as well as many other organizations have repeatedly stated that those who falsely accuse; if their allegations are proven false, they should be held accountable and should be subject to the same sanctions as those they victimize with their false allegations.

The devastation brought upon the falsely accused is indescribable. Besides the loss of reputation, there are lost promotional and career opportunities, financial ruin, divorces, and there have been cases in which the falsely accused have taken their own lives.

We will continue to update our readers with as much information as is allowable so as not to jeopardize any potential investigative effort that may involve other individuals connected to this case.